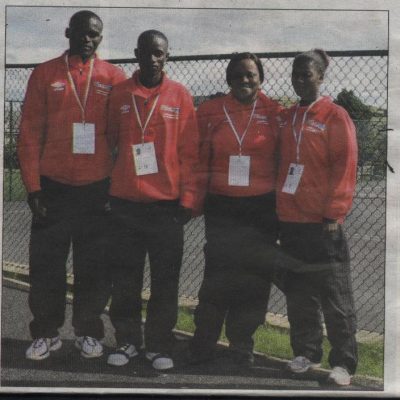 Sierra Leone get kitted up

The Sierra Leone Commonwealth Youth Games team departed the island saying they felt ‘the Isle of Man is our second home’ after experiencing kind generosity during their stay.

It has emerged that islanders helped out the team in a special way during the games, which finished last week.

Due to funding constraints, the team of three athletes, one coach and a team leader travelled to the island to compete with minimal kit and baggage.

Graeme Watson, allocated team liaison officer for Sierra Leone, said: ‘What struck me first at the airport was that the five team members had one suitcase between them, surrounded by the other teams with bulging suitcases each.’

Charlie Turner, of Intersport, stepped in by providing tracksuits, while Graeme’s employers at the Department of Environment, Food and Agriculture were able to donate a few TT jackets, and clothing also came from Paul Craine at Churches Together in Mann.

These were all very welcome in a weekend that saw some wet and windy Manx weather.

My Letter to the Editor in response to the above article

Having lived in the Isle of Man for almost ten years I don’t really know why I was so touched by the article ‘Sierra Leone get kitted up’ in Isle of Man Examiner Sept 20th.  It’s not as if I hadn’t already noticed how kind people are here.

There was something just so beautiful about the spirit of the games and the joy the young athletes experienced here during the Commonwealth Youth Games.  The weather may not have been on their side but the people of the island were; no matter where the athletes hailed from.

The icing on the cake was the story of the team of five arriving from Sierra Leone with one suitcase between them.  No doubt they were as excited to be here as those teams with bulging suitcases. Perhaps the members of the Sierra Leone team were oblivious to what we would perceive as their lack, perhaps we give so much attention to material possessions that we felt their lack more than they did!

How much clothing does an athlete really need … shorts, vest and shoes unless you happen to be Zola Budd!  After that, the big names step in, the logos, the branding which cost  a fortune and in the end take up funding that could go to better use and help other children to get a start. What the Sierra Leone team shows us was that you can get to the top without all the paraphernalia!

Now, I’m not taking away from the wonderfully kind gesture by Graeme Watson and other islanders who organised for the team to be kitted out with some very nice tracksuits and TT jackets and other items of clothing. I’m very sure the Sierra Leone team were very thankful to be protected from the wet and wind.  What I am saying is that a bulging suitcase does not always equate with wealth. Perhaps we give so much credence to possessions that we forget the message.

“Happiness resides not in possessions and not in gold, happiness dwells in the soul”.