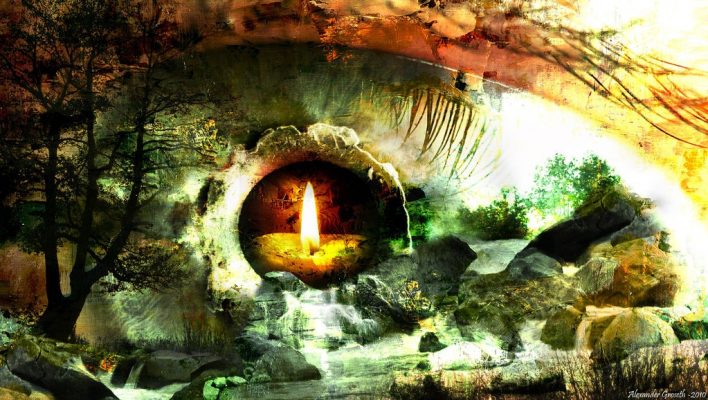 From the very beginning of our lives we are conditioned to believe that the material world we live in exists and is separate from us. Most people simply accept the illusion as real and never question the world they imagine as separate from themselves. Living a life based on illusion is bound to create problems and those problems are clearly evident in the lives of those who hold fast to their illusory world.

The Brain Interprets What We Receive Through The Senses

In order to explain what I mean it will first be necessary for me to talk about how we perceive the world in the first place. Everything that we know about the world outside of us we receive through our five senses. Light reflected from an object enters the eye and is focussed on the back of the eye called the retina. Nerves called rods and cones in the retina convert the light into electrical signals that are relayed to the vision centre, a tiny area in the back of the brain. The act of seeing occurs in that tiny space at the back of the brain. This means that everything you say you see outside of yourself is in fact being seen inside of you in a place where no light can enter.

The External World is Experienced Internally

In the same way your brain creates sound, touch, smell and taste from the electrical impulses it receives and we actually experience the pain we imagine we feel in our stubbed toe in our brain. The sound we imagine we hear outside is actually being heard in our own brain. In fact every experience we imagine we experience externally is in fact being experienced internally in our brain. We are in effect making judgements about ourselves, others and the world based on how the brain decodes the electrical signals it receives. This also means that though we never actually directly interact with the images we create in our brains some people still emphatically state that matter exists!

Look out of your window and pick something to look at. That thing you are looking at is a set of electrical impulses in your brain. The reality you imagine when standing on a beach and looking out at the horizon or staring up at the stars is an interpretation made by your brain of decoded electrical signals.

Since we are not set up to have direct experience with anything outside of ourselves how can so may people buy into and defend such an illusion as to believe that the world they perceive actually exists? Only a very few people have woken up from this dream reality and accept it for what it is, an illusion. The wise ones from ancient times called it maya or the world of perceptions lived completely within our own mind. We deceive ourselves when we believe that the universe exists outside of the mind.

Wake Up Call from Awakened Ones

Imagine the body as being a computer hooked up to the brain. The computer is then feeding the

brain the electrical impulses to create the experiences and images it wishes the brain to perceive. If you can imagine this then it is not such a big leap in thought to realise how easy it is for us to be conditioned to believe what we see, hear, touch, smell and taste is real and separate from us. But there are many ways to free ourselves from the illusion and people like Jesus have come into this world time and again to show us how. In every case their message has been used to reinforce the illusion and the message for us to wake up is lost in ideology designed to keep us sleeping.

What is Dream and What is Real?

Even in sleep we do not dream continuously. If we spend even 30 minutes in the whole night dreaming we are doing well. We go through cycles of deep sleep and dreaming and so at night we mimic what happens in what we call our real lives. When we sleep we wake up by dreaming and we can do this many times during the night. In that reality our dreaming is waking up. When we awaken in the morning we imagine that we have awakened from sleep and the dream world is not real. The people we meet in our dream like the people we meet in our so called waking life all experience the same so called reality. In the same way that an opinion does not become true because more people share it, the external world does not become real because more people share the illusion.

Who or What is the “I” Aware of Self as the Perceiver?

Up to now I have been citing the brain as the one which creates the perceptions we experience but the brain itself can be perceived and so it too must be an illusion. In fact anything that you can perceive must be an illusion a creation of the mind which must be separate from the mind and the body. So if the mind holds within it all that can be perceived then who or what is this being that thinks, feels and is self aware ? This is a question for another article but in the meantime it is food for thought and hopefully what I have said here will make you think and perhaps some of you may find the call to wake up appealing. For others what I have to say hear may provoke fear in which case you will find yourself reacting violently to the ideas presented here. In either case the reaction will tell you more about yourself and that is a good thing.

Links to Related Articles I have Written

The subject of the film you are about to watch is liable to make fundamental changes in your outlook on the material world.You should therefore watch it very attentively.