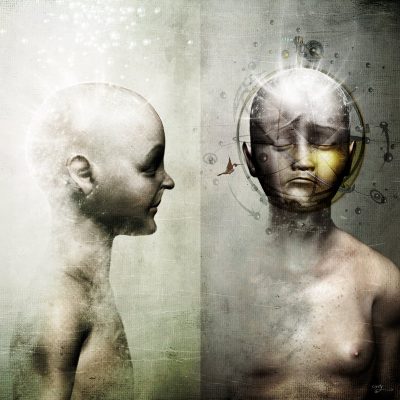 Projection is the way in which we avoid taking responsibility for those aspects we abhor in ourselves. Projection creates an illusion so elaborate that we completely believe it. Here is an example of how it works:

A father is angry with his son. He sees him as impatient and disrespectful. Every time his wife tells him of how their son lost his temper with their daughters and called them names, feelings of anger well up in him. Every time the father hears his son speaking disrespectfully to him or his mother he feels angry. The father can’t understand why his son won’t study and avail of the opportunities he himself never had. The father can’t understand why his son eats so badly and is addicted to fast foods although his mother prepares the healthiest of meals everyday from scratch. The father’s anger and frustration is directed at projections of himself that he has fastened to his perception of his son. Behind this perception of his son and almost completely hidden from view is the ‘real’ son.

Most of us never get to see behind the screen we place in front of people and upon which we play our own horror movies. The father is completely disconnected from these aspects in himself as long as he projects them on to others. In this case his son is mirroring the father’s own impatience and disrespectful behaviour. As long as the father demonizes his son, the movies he watches on the screen hiding his son becomes more and more exasperating.

Instead of owning the aspects he has pasted on to his son, he criticises and blames his son for those very things he cannot stand in himself. Instead of saying to himself … “How could I speak like that to someone so young and innocent? All he needs is my patience, my encouragement and support. He is innocent. I am using him to attack the aspects in myself that I loathe”. The father abhors his son’s addictive nature and indiscipline in order to justify his own excessive alcohol and tobacco consumption. Instead of applying his mind to pursuits that would expand his knowledge and awareness he chooses to numb himself with alcohol, tobacco and TV.

The father in this story represents each of us and how we live our lives completely oblivious to the lies we tell ourselves. The perception we have of others has nothing to do with them and everything to do with ourselves. We cannot recognise or change what we do not know about ourselves. So next time you see something in another that you don’t like, look for it in yourself.

Projection is what we automatically do. It is a mechanism employed by the subconscious as a means of self preservation. By separating ourselves from our own perceived faults and weaknesses, it is survival of the fittest. By projecting our faults and weaknesses on to others we make them weak in our minds and that is how we justify our attacks upon them and this is the reason why war exists.

Owning our Projections as a First Step to Healing our Relationships

Through mindfully being present in the now we can increase our awareness of these subconscious motivations to criticise and attack others. The way to do this is to initially exert effort in owning what we recognise as a fault or weakness in another. Simply stop yourself from boarding any train of thought that might lead you to judging another. In your mind make it a habit to say things like … ” There is another aspect of myself that seeks refuge in one I love. I do that, I am that and I am sorry for making you stand behind a movie screen while I watch movies I made up of you. I can change whatever I am not happy about in myself but first I must admit it is mine and not yours. I am not my perceptions and neither are those people I perceive in my life.” We are all one and when we reclaim what we have projected on to the world and others, only then, can we learn to love unconditionally.

I made an hypnosis audio for the father in question which included suggestions he wished to plant in his subconscious in order to heal his relationship with his son and to see behind the screen that prevented him from relating to his REAL son and not the one he had made up in his mind. The following are some of those suggestions which you might use to heal your own relationships and raise your awareness so you become more conscious of your destructive subconscious motivations:

Video by Xavier & Mary Nathan : Hypnotherapy to Correct Self Perception

Hypnotherapy for Young Children and Teenagers

All Criticism is Self Criticism