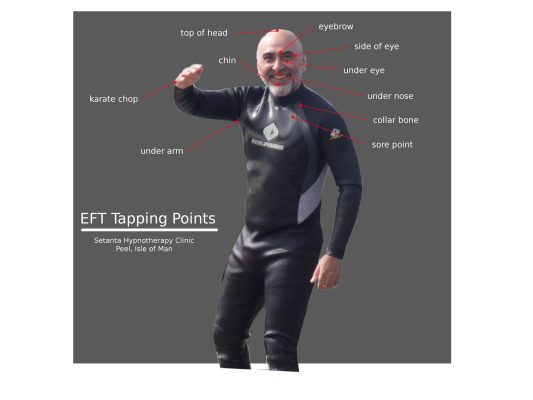 The History behind Tapping

In 1979 Dr Roger Callahan, an American psychologist, was working with a client called Mary. Mary had a water phobia so severe that she was terrified of all forms of water, swimming pools, rivers, ponds, in fact her phobia was so bad that she couldn’t even bathe her two young children! Dr Callahan had been working with Mary for over a year using all the traditional psychotherapy tools: relaxation therapy, cognitive therapy, hypnosis, desensitization etc. All to no avail, Mary had only made minimal progress.
At this time Dr Callahan was studying the meridian points in the body which had been discovered by the ancient Chinese. They had discovered that these meridian points are the energy channels that carry the vital life force to all the organs and systems of the body. The points run up and down both sides of the body and each point is associated with a different organ. The modern day Chinese medical system of acupuncture is based on manipulating these points with fine needles releasing blocked energy to aid wellbeing and good health. This has been in use for thousands of years.

Back to Mary’s story … during one session she was sitting by Dr Callahan’s swimming pool in a very distressed state and she mentioned about the physical discomfort she was feeling in her stomach. Dr Callahan asked her to tap a point under her eye and at the same time talk about how she was feeling. Within a short time Mary exclaimed that the physical stress was gone! Her phobia had disappeared and to date Mary has been free from the water phobia which wreaked havoc in her earlier life.
As a result of this successful therapy Dr Callahan continued his study of meridian points and developed a sequence of tapping to alleviate all kind of conditions. Thirty five years later this ‘tapping’ has taken the therapeutic world by storm and is part of therapy we offer at Setanta Hypnotherapy Clinic in conjunction with Hypno-Psychotherapy and Suggestion Therapy

So how does it work? The Science behind EFT

For some time people thought that there was no scientific reason why this should work, however, over the years much has been learned about the science behind tapping. When you are in a stressed state, angry, in fear or experiencing a negative emotion your body responds. Your brain goes into full alert, adrenaline pumps, all the muscles tense, blood pressure, heart rate and blood sugar all rise. This is what is called the fight-or-flight response which has evolved from way back in man’s existence … in order to survive he had to be ready to fight or flee from danger!

Now-a-days most people do not have to respond in this way but it is in our genetic make up to do so when faced with a real or perceived threat. The perceived threat may come from a traumatic incident from our childhood or it may be a learned response or indeed it may surface because of stress at the workplace or at home.

Whatever causes your body to react in this negative manner EFT/ Tapping releases you from that cycle of stress response. The limbic system is a complex set of brain structures that lies on both sides of the thalamus which is a midline symmetrical structure of two halves, within the vertebrate brain, situated between the cerebral cortex and the midbrain. The limbic system supports a variety of functions, including emotion, behaviour, motivation, long-term memory, and olfaction. However, it appears to be primarily responsible for emotional life, and has a great deal to do with the formation of memories. If you have had a negative experience in the past, let’s just say you slipped in the swimming pool or you were pushed in and had a shock in the water that memory is stored in your brain however it is not just the memory but also the emotions you felt at the time: the fear and the blind panic. Tapping targets the limbic system by dissociating the memory and the negative emotion thereby dismantling the subconscious fight or flight response to perceived fear.

Every time you are in a situation where you are near water those feelings are automatically activated by the subconscious and you have no conscious control over this. Logically you may try to talk yourself out of the panic and may sometimes succeed but each time you are in a situation which your mind connects with the original event you will experience that fight-or-flight response. EFT is effective in deactivating the trigger that automatically causes you to feel panic.

EFT therapy/Tapping while revisiting a past or present trauma in a safe environment and with a professional qualified therapist is a very effective way of releasing you from old responses which no longer serve you. Tapping sends a calming response to the body, the client feels safe and these changes are permanent.

At Setanta Hypnotherapy Clinic, Xavier and I use EFT or Tapping as part of our intervention therapies for clients undergoing Hypno-PsychoAnalysis. Hypno-PsychoAnalysis allows the client to get to the root cause of their condition whether that be depression, trauma, anxiety, insomnia or any other deep rooted emotional problem and then the client taps on the emotions as they arise. As I have already said it is vital that the therapist is trained to work with clients who may experience an abreaction during therapy.

As in the case of Dr Callahan and Mary we use EFT or Tapping as part of our Suggestion Therapy with phobias.

For more information on EFT or any of our therapies please call Tel: 842938

Why Hypnotherapy is so Effective in Treating Depression, Anxiety, Panic Attacks and Insomnia